I finished 6th (out of about 20) in the Street Tire class. Below are videos from my DNF run (I lost control and went into the grass) and from my final run.

Here are some pictures from my day at Virginia International Raceway.

So for Ashley's birthday her sister is going to clean our house for her. Which causes an interesting conundrum. How much do I need to clean up before she gets here?
She knows that I have been on my own for almost a week; but, how much mess is okay?
I'll let you know the out come.
Posted by Unknown at 7:37 PM 2 comments:

Hey I found a vacation that April and Ryan will have to take for me to North Carolina's Outer Banks.
It sounds great to me, laid back quiet beaches, activities to do with the kids, and free stuff.
If only North Carolina was closer. Sigh.
Crystal
Let me know if it won't let you view the whole article. I especially liked the "Coolest Nature Escapes," "Favorite Day Trip," "Best Animal Adventures," "Favorite Souvenir Shop," and "Where to Eat."
Okay so I liked pretty much all of it.
Posted by Jake and Crystal at 1:08 PM 1 comment:

Okay Jake.  You win.  Volkswagon convinced me.  As soon as they bring this to the states, I'll get a gasser. Click the image for more pics and info.

More clouds and the silver lining....

Here is an update on the flooded basement situation.  At first our insurance was iffy if they would cover anything at all.  The adjuster was really nice and good to us though.  He concluded that the water did in fact come through the windows and all work will be covered by our home-owners insurance.  The Alpine guys ripped out the dry wall below three feet in the rooms and discovered the next problem.  The guy who owned the house before us finished the basement, but didn't do a stellar job with the wiring.  Rather than frame the basement with 2x4's like you normally would do, he affixed 2x2's to the foundation.  Since 2x2's aren't really big enough to put wiring through, he decided to run the wiring along the floor underneath the 2X2's (they don't quite go all the way to the floor).  We are all lucky and glad that we didn't get electrocuted during clean-up.  It is also kind of a miracle the house hasn't burned down.

Alpine has seen sub-par basement finishes before and knew that some home insurance policies include "code upgrade clauses".  Turns out ours is one of those.  Thanks to the restoration people being on the ball, Heather and I get to have all of the wiring in our house upgraded to meet code.  This will probably mean all new drywall and framing on all exterior walls in the basement, new wiring throughout the basement, fix the stupid light switch in the hall that controls 2 bedrooms (putting switches in each room) and put a light in the hallway downstairs.  I think they will even fix the fact that the circuits all have too much stuff on them (outlets upstairs are hot to the touch right now as the fans run in the basement because of power draw).  A couple of the breakers trip when you run multiple things at the same time (the fans in the basement require us to head out and reset the breaker several times per day).  Hopefully we will get a couple new home-runs for the basement instead of just tapping into the upstairs circuits like we currently have.

We aren't excited to have our basement ripped up for the forseeable future.  It seems to be for the better though.  I am really glad that we found the wiring problems.  It really is scary/dangerous having the wiring as bad as it is; it really needs to be fixed.  I probably would not known until the house burned down.  Once they found the bad wiring, I probably would have rationalized and justified my way out of ever doing all the work to fix it if it wasn't being done for us.  It really does need to be done though, and sooner rather than later.

All in all, for how much I was upset at things when I heard the basement was flooding, things are turning out about as good as they possibly can in this situation.  Just to top things off even more, the insurance company is going to count the work we did to take things out of the rooms and vacuum up the first 150 gallons of water.  They taking several hundred dollars off the deductible.  Life is good.

I was pretty happy with all this news.  We are getting all of the wiring in the basement fixed (on the same insurance claim/deductible no less) and therefore my house not burning down.  Heather wanted to sweeten my day a bit more though.  She made me home made corn dogs and churros for dinner tonight.  It really has been a pretty dang good day here in Smithfield.

Here are some pics of the current status of our basement:

Easter in Smithfield was exciting. The fun started Saturday morning. Smithfield City did an Easter egg hunt at Mack Park a few blocks from our house. It was more of a candy hunt, but that is what the kids wanted for anyways. I am still amazed at how much candy was strewn across the lawn at the park. I would guess there were 200 kids there. Noah and Grace probably had less than average and they still came home with more candy than they needed. After Mack Park, we went to the store to grab some things for dinner. The grocery store was also having an Easter celebration. More candy for the kids. More sugar highs.

Next on the agenda was building a sandbox. Brent and Nedra came up and we started clearing out a spot in the lawn. Noah was ecstatic to go to the landscaping supply place and pickup the sand. We got to talk about the skid-steer that loaded the sand. He thought the name was silly, and thought the reason behind the name was even funnier. After we got home, I learned that while the tires on the truck are good enough to pass state inspections, they aren't good enough to drive on wet grass. It didn't make Heather's day to see me ripping up the grass in the yard.

When we got back, we finished digging the hole, and building the wooden frame. We were about to start unloading the sand when Heather came and told me the happy news of the night. There was ~2 inches of water in the three bedrooms in the basement. There were 4 of us that spent ~2.5 hours with wet-dry vacs sucking up water. I have no idea how much water we got out, my best guess is around 60-70 gallons. We finally gave up and called in the big guns. The Alpine guys ripped out all of the carpet pads, did their own extractions (getting who knows how many more gallons of water) and set out fans and a de-humidifier.

After looking around at things, it turns out that I caused the flooding. As a part of the Spring preparations, I turned the sprinkler valve back on. The guy we bought the house from showed me the valve out front, but everything else was under snow. We never opened up the sprinkler control boxes and I didn't see that he had a drain valve installed there. In case anyone cares, you need to close the drain valve (in both boxes, front and back), before you turn on the main sprinkler valve out front, or life gets exciting. Luckily we caught it within 6-8 hours of turning the water on. We rarely go into the basement and it could easily have been days before we caught it.

Today has been a lot better. The kids actually slept in. We got ready and headed to church. After church, we spent the afternoon just relaxing. We took a nice walk, and the kids played in the sand box, and most of us took naps (Noah is too big for naps...) All in all, it was a very eventful Easter weekend, but pretty nice.

Here are some pictures of the happenings at our house this weekend.

What did you do today?

I don't recall ever having a Saturday conference in which I felt like I did so much.
Posted by Unknown at 6:26 PM 1 comment:

And now, the moment you have all been waiting for.... 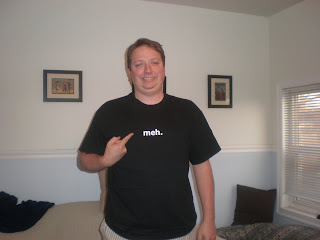 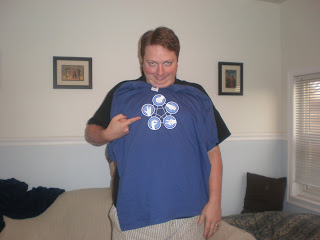 Both. He is currently wearing the "meh" shirt. Thanks for the input. I think he enjoys them.

About the adoption. We spent our second anniversary at interviews. Isn't it romantic? I thought so. Long and short is - we cleared. We have to turn in our letter and do a paper copy of the profile, but our case worker said there will be no problems with approval. She will write our home-study next week or the week after. It will then be sent to the director for approval and then we will be approved. Yay. Next: the waiting game. Wahoooooo!!
Posted by Ashley at 6:40 PM 1 comment:

A good look at where I'll be and what I'll be doing Saturday.

Should get up around 125mph.